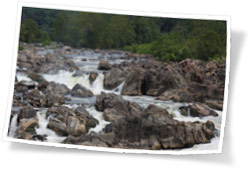 I am not certain of the pedigree of the Koan, but am familiar with it primarily as a feature of Zen practice. Essentially, a koan is a word, phrase, anecdote, or story which is intended to illustrate a particular point, or which is intended to, by virtue of it’s profundity or logical disconnection, trigger at least a momentary glimpse of awakening in the student.

Obviously, there is quite a bit of context underlying the above paragraph, which I am not going to get into in this post, but I do encourage you to investigate Zen further if you are so inclined. Zen is a fascinating branch of Buddhism in it’s own right, and is probably one of the more “commonly known” forms here in the States.

What I do want to do here, is feature one of my favorite koans. It takes the form of a story:

Two monks were walking towards the river, to the only passable section within several miles. As they approached the bank, they noticed a woman, standing alone. The monks of their order took vows prohibiting them from touching or even interacting with women, and the younger monk was greatly concerned at the woman’s presence.

As they approached, the woman lamented her inability to cross the river, and entreated them to help her. The younger monk, sticking to his vows, ignored the woman’s pleas and would not even look at her. The elder monk, however, after failing to persuade the woman of the safety of this crossing, picked her up in his arms and carried her to the other side.

On the opposite bank, the elder monk set the woman on her feet, and the two monks and the woman parted ways.

For several miles, the younger monk grew more and more agitated by his companion’s actions, until finally the elder monk asked what was troubling him.

“Brother,” the monk said, “you know we are forbidden to touch or speak to women, and yet you conversed with her and carried her in your arms across the river!”

The elder monk looked at his companion, and said “I left the woman at the side of the river, brother, why are you still carrying her?”

More than likely, this koan can be interpreted in several different ways, but it seems that I primarily see it as an illustration of the relationship between attachment and suffering. The younger monk was suffering agitation and frustration with his fellow monk because of his attachment to the rules of his order, his feelings of propriety, the gender of the individual they encountered, and his perception of conflict between the elder’s actions and what was expected.

The elder monk, conversely, was able to act, and to practice compassion because of his non-dualistic thinking and his freedom from attachment.

Again, I would like to talk about attachment and suffering more directly at another time, but this may serve as another example of the concept, and something to loosen the hinges, as it were.

I’m still interested in your thoughts regarding this koan, and your alternate interpretations or perspectives, so feel free to leave a comment.