Why I Can’t Be Buddhist 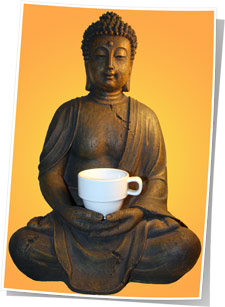 When I discovered Buddhism, what I found was a philosophy and set of teachings that coincided with my own thoughts and feelings about the world better, in many ways, than the brand of Christianity in which I’d been raised. Certainly, there are parts of the engendered faith of my childhood that I still agree and identify with, parts that give me comfort, and parts that ground me in my skin. But the endemic faith of my adulthood has been informed by my belief that it is in the convergent points between various world philosophies and religions that any true religion most likely lies. A common refrain of mine is that in every reasonable philosophy or religion, there surely exist some nuggets of truth. It is in the context of these two beliefs that my own philosophical, spiritual, and religious pursuits have been grounded.

My initial introduction to Buddhism—and to eastern thought in general—revealed a philosophy based on tolerance, inclusion, compassion, respect, wisdom, with a strong leaning towards self-understanding and self-improvement. These are things that I believed were also central to Christian teaching, but which I felt were almost unilaterally missing from the Christian religious community.

As I learned more about its philosophy and teachings, and particularly about meditation, my interest in Buddhism as a practice grew. The life of a spiritual comtemplative holds some appeal to me, but I would never be able to remove myself from the world enough to become a monk. Meditative practice, like prayer, seems to offer some window into that world without making life-changing sacrifices or an ascetic commitment. Also, it seems that meditation can offer something that prayer generally cannot—an opportunity to explore not just your relationship with God, but your relationship with yourself.

These things mean that Buddhism—both as a practice and as a philosophy—appeals to me very greatly. Unfortunately, Buddhism isn’t exclusively a practice, or a philosophy.

While the central beliefs of Buddhism neither depend on nor proceed from the assumption of a deity or God-like being, Buddhism in general has adopted theism as an integral part of the religious system. Aside from the various gods and goddesses, prayer and devotions are often offered to numerous boddhisattvas (roughly equivalent to Christian saints) who are associated with particular aspects of life or psychic well-being. And though these figures don’t have to be worshipped in a traditionally theistic way, it is fairly common, even in modern American Buddhist practice, to find reverent references, prayers, and supplications being directed to them in the course of dharma talks or guided meditation sessions.

Growing up in the Christian tradition, the worship of false gods and idols was drilled into our heads as one of the most serious sins. And, of course, the thing about religious indoctrination is that it tends to take root, if at all, very very deeply. So, to this day, I still operate under the principles, as a Christian, that I must guard myself against the worship of a “false god,” which makes a committed Buddhist practice an uncomfortable proposition. Herein lies the first major reason why I can’t be a Buddhist. Coincidentally, this reason in part also prevents me from converting to my wife’s brand of Christianity—Catholicism.

As a side note, however, to the one-god commandment; I have no problem holding the idea that the God of Islam, Judaism, and Christianity are all one and the same. Likewise, on some levels, I can easily (internally at least) equate many ideas of eastern philosophy and buddhism with that same singular conception of God as well. So, in a way, the God that I worship is also present in Buddhism… he just seems to have company there that I’m not comfortable with.

The other big thing that dissuades me from a more active, participatory engagement with Buddhism, is the almost overwhelmingly whorish extent to which it has been commercialized in this country. The wealth and clout of televangelists and mega-churches in the Christian community has long been an indicator that there is a ready supply of “seekers” in the world more than willing to part with their hard-earned money for the simple idea of salvation, self-improvement (or self-castigation), and a sense of belonging. This fact is no less obvious, and no less disheartening, within the Buddhist community.

I haven’t measured and calculated it, but i would wager that, within the pages of the glossy-covered major quarterly buddhist magazine I occasionally buy, there’s a mix of about 60% advertising to 35% actual content (the other 5% is white-space). Of the advertising, I would guess that probably at least 50% of it is what I would consider to be purely profit-motivated, with the rest being genuine attempts at sharing a talent, a gift, or a calling.

So, while the underlying teachings are subtle, relevant, full, and beautiful, there’s this tarnish of crass consumerism on American Buddhism that makes it hard to stomach. Even if you can wade through all the ads for DVDs, mountain retreats, and the books on “Letting Go of the Ego” written by the 13th reincarnation of the 4th Dromedary of the Purple Orchid School, it can be hard to tell the difference between a genuinely committed teacher or practitioner, and a charlatan who’s mainly interested in an easy life or a quick buck.

Though this might not, by itself, prevent me from being a Buddhist, it sure doesn’t make things any easier.

So, what are we left with, then, if the teachings resonate within us, but the structures or daily realities leave us cold or even antagonized? My personal feeling is that you can take the best parts, build a practice that is unique and personal, and leave all the baggage behind. In my opinion, religion—and especially spirituality—are an inherently personal thing anyway, which we each are constantly re-defining at every moment.

For me, the goal (which I am currently about as far away from achieving as is possible) is a consistent meditation practice reinforced by reading Buddhist teachings and listening to dharma talks. I have some interest in sitting in with local meditation groups, if they’re relatively free of the religious baggage, and possibly even joining a sangha if the fit is right.

There are plenty of online resources, as you might imagine, for learning more about Buddhism and meditation. I have listened to quite a few dharma talks by Gil Fronsdal of the Insight Meditation Center, and found them to be a good fit for me personally. There’s also the San Francisco Zen Center, and the Zen Mountain Monastery which also produces WZEN.org.

If you’re an unrepentant cynic or heckler of hippy-sounding self-help-style psychobabble, you may as well skip it, unless you can get over yourself long enough to try to understand the implications. As with most self-analysis type stuff, some of this is just plain common-sense, but the majority of it may be incredibly revelatory, especially if you actually apply it.