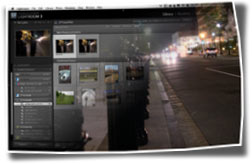 One of the chief struggles for an amateur photography enthusiast, apart from developing your skill as a photographer, is figuring out how best to manage your ever-growing collection1. Importing, naming, securing, processing, and filtering thousands of photos often requires sophisticated planning and a stable workflow.

For various reasons, I’ve settled on Linux as my platform of choice, which has its benefits and occasional deficits. As a continual tinkerer, I tend to run more up-to-date but less stable versions of software, which means the tools I use for certain tasks sometimes have to change while a project shakes the bugs out.

For example, I have gone through Picasa, F-Spot, DigiKam, and Shotwell, only to find that they all have bugs, problems, or fundamental design flaws that make them unacceptable to me.

In my opinion, F-Spot is the best photo manager on Linux, but the last few major versions have been worryingly unstable. Shotwell is good, but has also been somewhat unstable—though this may be attributable to the aggressive development cycle of earlier versions—and I have generally been opposed to their versioning model and the inability to save metadata directly to photo files2. DigiKam has a respectable feature-set for a photo organizer, but isn’t user-friendly. And while Picasa runs under Wine, Google is no longer producing or supporting a bundled Linux build.

Essentially, there is no native Linux photo management software on which I can rely.

My wife is also an amateur photographer, and since most of our pictures are of joint interest (family, children, vacations, etc.), we’d like to maintain a unified collection, rather than having multiple copies of the same photographs floating around on multiple machines in various states of processing. She’s also a die-hard Mac fan at this point, so even if I found a suitable tool for myself on Linux, it might be difficult to get that software to play nicely with what she’s running.

The third complication is that my wife is most decidedly not a computer geek, and she has a very demanding career, so any solution she adopts must be easy to understand and as transparent as possible. And should she ever have an issue, I would be coming to her rescue, so our solution for her must be something with which I can stay familiar.

The workable, if not ideal, solution

After months of research and consideration, it became clear that the easiest way to meet my major criteria—a unified collection, stable software, and easy enough for my wife to actually use—was for us both to use the same software. From here, it wasn’t hard to settle on Adobe Lightroom. I was already familiar with Lightroom after years of watching Photoshop User TV, and though it doesn’t run on Linux, it does run on both Mac and Windows. Since I generally buy computers with Windows pre-installed, it’s a pretty safe bet I’ll always have some way of running it.

Currently, I run Lightroom in a Windows virtual machine, or boot from my laptop’s original Windows partition3. It’s a bit of a cheat, but I decided I’d rather “cheat on” Linux with Lightroom, than spend hours a week fighting broken software. Also, it meant my wife had one less thing to complain about me wasting my time on.

So, how do I salvage my pride and keep this photo workflow Linux-based? I keep Linux in charge of what Linux is good at—single-purpose tools and server stuff.

Even on a single platform, it isn’t easy to find good software that does everything you need, and to establish a photographic workflow that makes sense. Even the best end-to-end workflow application available doesn’t offer every feature I would like, but thankfully the workflows it supports can be supplemented by the judicious application of some narrow-focus tools. And, with only a few concessions in the realm of personal principles (such as never running Windows again), I can stay rooted on my platform of choice, while enjoying the benefits of better commercial software support. Perhaps one day Adobe will get off their lazy tailbones and make Photoshop and Lightroom the crown jewels of software development that they could be, by making them truly cross-platform.

Until then, or until F-spot or Shotwell become more stable and full-featured applications that better support a full end-to-end workflow, or until Bibble gets off their high-horse and supports DNG, I guess I’ll just have to make do.

If you’ve struggled with setting up a photographic workflow on multiple or just a single platform, and have any insights, I would love to hear them. Especially you Linux photographers (I know you’re out there). How do you manage your photos? How do you facilitate sharing your collection with others? What’s your backup strategy? Answers to any of these questions would be welcomed in the comments below.

collection
The “physical” files and directories which comprise your photo… collection.
library
The software database that contains references to, and meta & edit information on some or all of the photos in your collection.

2. Lately, however, I’ve been leaning toward using XMP sidecar files for metadata, as it would reduce bandwidth overhead for remote backups—using in-file metadata means having to backup the entire file each time you add/change a keyword or make an edit, while using sidecar files means only the updated sidecar file would have to be backed up, saving megabytes, possibly gigabytes of bandwidth.
3. I’ve found that, installed on 64-bit Windows 7 running natively, Lightroom is excruciatingly slow and completely unusable. Surprisingly, once the VM settings are tweaked appropriately, Lightroom running under 32-bit Windows XP in a virtual machine is perfectly fast and usable. (I do have a rather beefy machine at this point, which makes this easier.)
4. The only native DNG converter I’ve found—part of the KDE project’s kipi plugins—killed the in-camera white balance setting during conversion. There are other Raw processors for Linux, but I’m not aware of any others that have a batch conversion feature.