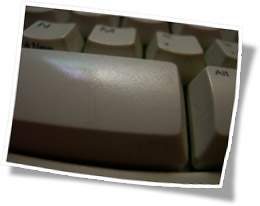 If there’s one thing I’ve learned about becoming a more productive computer user, it’s this: keyboard shortcuts are the holy grail. In my average workday, I would guess that I could shave over an hour off my time on a lengthy project, just by learning and judiciously applying keyboard shortcuts.

Obviously, this will be most effective for people who already spend most of their time with their fingers on the home row (writers & coders), but many of the best mouse-centric programs often have single-letter or one-handed shortcuts that are very beneficial.

Though I’m planning to write a few posts dealing with specific applications that I use every day, and my favorite or most frequently used shortcuts in those applications, there is also quite a bit that is available by default in most modern operating systems. In this post, I’m going to try to give you a few common shortcuts that will work on Windows, Mac OS X, and Linux.

It should be pointed out that my familiarity with Windows ends with XP, and with Gnome on Linux.

Keyboard Shortcut: Alt-Tab, (Cmd-Tab on Mac OSX)
One of the most basic and often-used shortcuts on any OS is Alt-Tab. If you have several windows or applications open, Alt-Tab will switch between them, usually sequentially based on when each window was last accessed. For Mac OS X, this shortcut operates a bit differently, switching between applications instead of windows. On Mac OS X, you may use Cmd-` (that’s the backtick or left single-quote key) to switch between the current application’s windows.

Keyboard Shortcut: Alt-F4, (Cmd-W on Mac OS X)
Honestly, because I spend so much time on different platforms, and especially because of time I spend in Virtual Machines, I don’t use this one as often, frequently falling back to clicking the close button using the mouse. However, if you learn this one, it can be a time-saver. On Windows or Linux,Alt-F4 will close the currently selected window, or, if the current window is the only open window of the current application, it will quit the application. On Mac OS X, closing all of an application’s windows does not quit the application. Instead, you may use the Cmd-Q shortcut at any time to quit the current application.

There is quite a bit that you can do with just the Tab, Arrow, and Enter keys. These are handled pretty consistently in Windows and Linux applications, though there are some exceptions. Mac OS X doesn’t handle these very consistently at all, so YMMV.

Basically, if there are multiple sections, panes, data-entry fields, or buttons in a typical Windows or Linux window, you can switch between them using the Tab key. This also works for links in most web-browsers. Usually there will be some indicator as to what is the currently “active” object, which you will see change each time you hit Tab. Now, if you have an active text field, in which the cursor is flashing, it may not be possible to Tab out of it. This is one of those points of inconsistency, which requires some trial-and-error.

You may also use the arrow keys, if you have them, to switch between objects, especially objects in a list, like filenames, or items in a dropdown/select box.

Usually, the Enter or Return key will select, submit, or open whatever is the active object. This is probably the most inconsistently handled, however, so often-times I will use the mouse until i figure out how this functions within specific applications.

Some other things that have slowly become more universal are common tasks like cut/copy/paste, new window, save, and print. Below are the most common examples of these, but sometimes different applications may not adhere to this “standard.”

Keyboard Shortcut Ctrl-x (Cmd-X on Mac OS X)
Will cut (remove) whatever is currently selected, and place it temporarily in the system “clipboard.” Most OS’s only keep one item in the clipboard at a time, so if you cut two things in a row, the first thing will be lost.

Keyboard Shortcut Ctrl-c (Cmd-c on Mac OS X)
Will copy whatever is currently selected into the system clipboard. As above, anything sent to the clipboard will displace whatever was there before. If you cut then copy, or copy then copy, the first item cut or copied will be gone.

Keyboard Shortcut Ctrl-v (Cmd-v on Mac OS X)
This will attempt to paste the contents of the system clipboard into the active object. If the clipboard content is compatible with the target object, the paste will succeed. If not, the paste will fail. This is handled inconsistently between Operating Systems, and even between applications on the same OS. Sometimes you can paste image/graphical content into text documents or text fields, but many times you cannot. This is another trial-and-error/learn-your-tools kind of situation.

Keyboard Shortcut Ctrl-N (Cmd-N on Mac OS X)
This is not consistently handled, but more often than not will result in a new application window or new document window being opened in your current application.

Keyboard Shortcut Ctrl-S (Cmd-S on Mac OS X)
This is perhaps the most important keyboard shortcut to learn, and developing the habit of hitting this shortcut after every change will save you, at some point in the future, from panic attacks and headaches. Until it becomes second nature, your mantra while working should be “ctrl-s, ctrl-s, ctrl-s.” This is fairly consistent between apps and OS’s, but make sure you learn this shortcut for your specific tool.

Keyboard Shortcut Ctrl-P (Cmd-P on Mac OS X)
This should be seeing less and less use as people become accustomed to reading things on screen, but it can still be a handy one to remember. In most cases, especially in document-oriented applications, this shortcut will bring up the default print dialogue and allow you to setup and print the document. I know, however, in some programs, this shortcut will simply print the document with the saved print options, without first popping up the print dialogue.

The Basics, At Least

I think that covers some of the most basic, universal shortcuts—a good example of how we benefit from the homogenization of computing culture across platforms.

For those of you who’ve been using computers for more than 5 days, you probably know a lot of this stuff already. Perhaps you don’t use it, but you probably know it. For the rest of you, this is just the tip of the iceberg. There’s so much more to learn, and I implore you to dig into your particular set of tools and applications and learn the shortcuts for the functions you use most often. You’ll save yourself tons of time and frustration.

Feel free to leave a comment about what some of your favorite shortcuts are, either in your OS, or your often-used applications. Maybe you can help others be more productive too!