Convert PDFs to JPGs from the Commandline 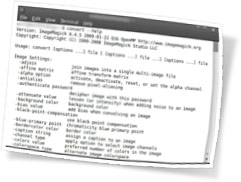 When I first switched to Linux, I also attempted to switch to Gimp—which is generally considered to be Linux’s Photoshop. My experience with Gimp, especially versions before 2.5, was not great, and I switched back to Photoshop pretty quickly.

One of my freelance clients publishes a newsletter every month, and I convert the PDF into JPG images to use on the site as a sort of low-fi online version. I discovered pretty quickly that Gimp’s conversion routines did a terrible job. Eventually, I found a solution using ImageMagick, which I had used previously in my bipolar gallery scripts.

Converting images is super easy with ImageMagick’s convert command, and as it turns out, convert can also handle PDF files.

Here’s the commandline I use:

Basically, this converts each page of the pdf into a 300ppi JPG with a maximum dimension of 4100 pixels and a JPG quality setting of 100% (or no compression). Each page is saved as an individual JPG named outputfilesXX.jpg (where XX represents the page number, starting at 00).

This gives me much higher-quality starting images than Gimp provided, which I can then resize as needed.

convert has a huge array of features beyond this simple example, and is worth a look if you need to do image manipulation from a script, or batch operations on images from the commandline.