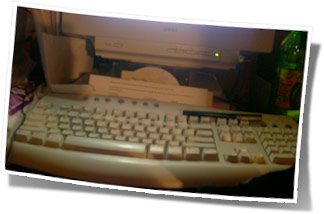 I don’t remember when I first heard about Linux, or even Unix, but I do know it was a long time ago. My first impression was that Unix was an OS for mainframes and comp. sci majors. When I learned that it was capable of multitasking and running a GUI, my brain nearly fell out. Years later, when I learned of Linux, I got basically the same impression—it seemed like trying to run a mainframe OS on a little desktop box.

At a time when I was spending countless hours of my life endlessly tweaking my Amiga and whatever crap PC I had on hand, or trying to devise the perfect partition/directory structure, spending 3 hours compiling something just to get the machine to boot up seemed like a colossal waste of time. As time went on, the idea of Linux as desktop OS was becoming less ridiculous, but there still seemed to be a giant learning curve. It was hard enough keeping Amiga and DOS cli commands and syntaxes straight, much less learning an entirely new one!

A few years ago, I finally got a Macbook at work, running OS X, which is Unix based. As I learned more about the Mac—and kept running into brick walls of broken or missing functionality—I started to dig into the command-line. I got a little more comfortable with it as time went on, to the point where I was seriously considering a personal switch to OS X, and finally ridding myself of an unfortunate dependence on Windows.

Somewhere around this time, my personal laptop (which had been in and out of the shop) finally got classified as a “lemon,” and I got to pick out a new one to replace it. Unfortunately, I was told that I couldn’t replace it with a Mac, but instead had to go for the closest spec-equivalent machine in the store. I ended up picking out a Gateway model, a few years more advanced and well-appointed than the old one, which was pre-loaded with Windows Vista.

Now, I’d already heard the horror stories, and was prepared for things to go wrong. But, I still wasn’t prepared for quite how quickly it would happen. As it turned out, the machine didn’t even make it through it’s first boot. It crashed and restarted, and then maybe on its second (or third) boot, it finally managed to get to the desktop. After I attempted to run some innocuous program like notepad or something, the machine crashed again, and I turned it off and downloaded and installed Ubuntu.

I haven’t looked back since then, and now have Ubuntu installed on both my personal machines, and my desktop at work.

Honestly, without the time spent playing around on the Mac, I never would have felt comfortable enough to take the Linux plunge, and likely would have downgraded the machine to XP. The great thing about Mac OS X is that, for the average user, it’s simple and uncomplicated, but for the geeky expose-the-wiring types, it offers so much more power and tweakability than the older Mac OS ever did.

And, with Ubuntu now pretty much the desktop Linux leader, things are shaping up. I wouldn’t classify Linux as “Mom-ready” quite yet (not my mom, anyway), but it’s getting there. And for someone like me, who enjoys getting their digits a little dirty typing in esoteric commands and tweaking settings ’til their eyeballs dry out, well, Ubuntu is pretty much perfect.