Storytime: The Tale of Peter Rabbit 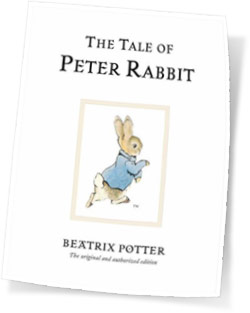 The Tale of Peter Rabbit is one of those classic books that probably every kid has read at some point. It is also a story that has been told and retold in children’s stories, probably since there were stories. It’s the classic tale of the mischievous child—Peter—who, when given clear instruction and a compelling reason to not do something, proceeds to do exactly what he was warned against. As if that weren’t enough, Peter’s total lack of self-control extends to his eating habits, such that, when presented with an abundance of food and no supervision, he eats himself sick. As could be expected, his situation goes from bad to worse, and he ends up naked, wet, cold, and alone, with the hidden enemy lurking somewhere between him and the freedom he seeks, which lies in some unknown direction. Upon finally arriving home, Peter’s only punishment is his own self-inflicted illness, despite his having lost yet another set of clothing, and having obviously been up to no good. As near as I can tell, the moral of this story is that you can be as disobedient and mischievous as you like, as long as you’re smart about it.

This and the final track on the 2004 CD were a bit of a concession, in that this isn’t necessarily one of my favorite stories. I think I felt that three stories wasn’t quite enough, so I picked the last two to fill out the list a bit. I do like this story, however, and there is just something fun about saying “Flopsy, Mopsy.”