Storytime: Guess How Much I Love You 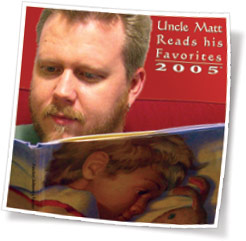 The 2005 CD wasn’t actually completed until 2006, and only included three books, one of which was the longer but much beloved Velveteen Rabbit. (It is kind of sad when time and timeliness become a factor in the creation of a Christmas present… but it was in this instance. I’ve tried to be better about it since then, to greater and lesser effect.)

, by Sam McBratney and Anita Jeram. 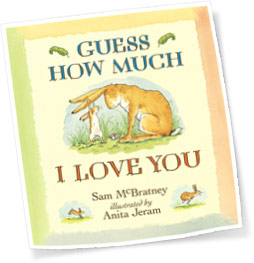 This story documents a peculiar exchange between a narcissistic elder bunny and an insecure but effusive younger bunny who share a vague and unhealthily competitive relationship, and who apparently belong to a cult which has stripped them of their names and only allows them to be referenced by the color of their fur.

As the story progresses, the junior bunny attempts to elucidate the magnitude of his devotion to the elder bunny, but with each new platitude, the elder bunny is compelled to explain that his devotion to the younger bunny is actually the greater. He accomplishes this through various means, including physical feats of strength and simple size-related intimidation techniques. In the end, the elder bunny—not content to allow the youngster even the smallest victory—must get in the last word, even as his companion loses consciousness. One imagines the elder bunny smiling to himself with smug satisfaction, before dropping off to a fitful, horror-filled sleep.

[UPDATE: 1 hour after this post launched, I realized I’d neglected to include the audio. Whoops.]